for Taegum (Korean flute), and Percussion

‘In the Presence of Sound’ is composed for Taegum (Korean flute), and percussion consisting of wind-chimes, tiger-gong, temple-blocks, Buk (Korean drum), and Crotales. The piece was specifically composed for the 2017 ‘Creativity Unlimited Festival.’ The title of the piece was inspired by photographer Michael Flecky’s photographic collection ‘In the Presence of Trees.’ The creative focus in the music attempts to articulate the concept of noise as momentary sonic grit and undulating sound texture within East Asian, and Contemporary Australian approaches. The sonic palette explores techniques on taegum and percussion that of wind-tones, slap tongue, bowed crotales, and frenetic quirky passages juxtaposed with moments of silence. The piece is also flavored with additive meters that create a sense of momentum, and direction which is prematurely interrupted each time through an undulating sonic build-up of sound, and contrasting motifs, thus disturbing the flow of the rhythmic phrases.

On a subliminal level the development of the micro and macro design of the piece is also partially influenced from Flecky’s photographs. The black and white images feature a magnetic beauty of objects found in the natural environment associated with the formal imagery of trees. From a personal creative perspective, the monochrome photographs of the found objects create a sense of a hidden ‘presence.’ The found objects with their calm, enchanting, haunting, and dance-like idiosyncrasies exist as moments in time to admire. However, there is more to the image than meets the eye. When these idiosyncrasies are viewed from an artistic/creative lens, in tandem with the concept of momentary sonic grit, and undulating sound textures, the hidden ‘presence’ is deciphered to reveal an ‘In the Presence of Sound’ moment.

‘In the Presence of Sound’ performed by Hyelim Kim, and Claire Edwardes at Western Sydney University on 11 August 2017 during the ‘Creativity Unlimited Concert.’ 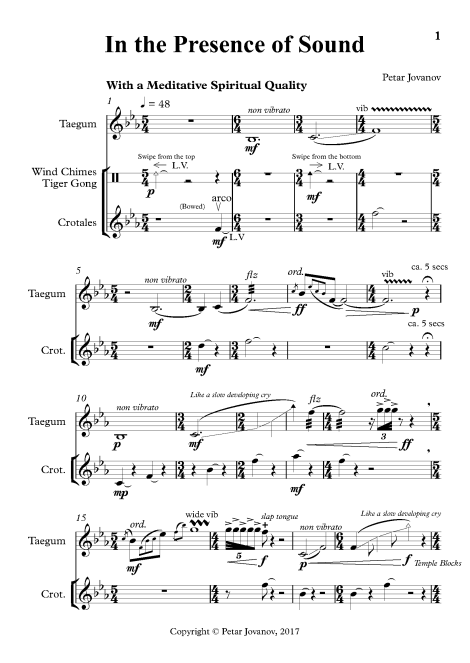 © Petar Jovanov, In the Presence of Sound (bars 1-18) – an example of sonic grit and undulating textures expressed through slow cry-like glissandos, bowed crotales, and rapid acceleration and deceleration combined with crescendoing dynamics, slap tongue and moments of pause.

‘In the Presence of Sound’ was performed by Dr. Hyelim Kim, and Claire Edwardes on 11 August 2017 at ‘The Playhouse’ Western Sydney University as part of the 2017 ‘Creativity Unlimited’ Festival.